WHAT ARE YOU LOOKING FOR?

The activities lady (“Work, build and not whine!”) 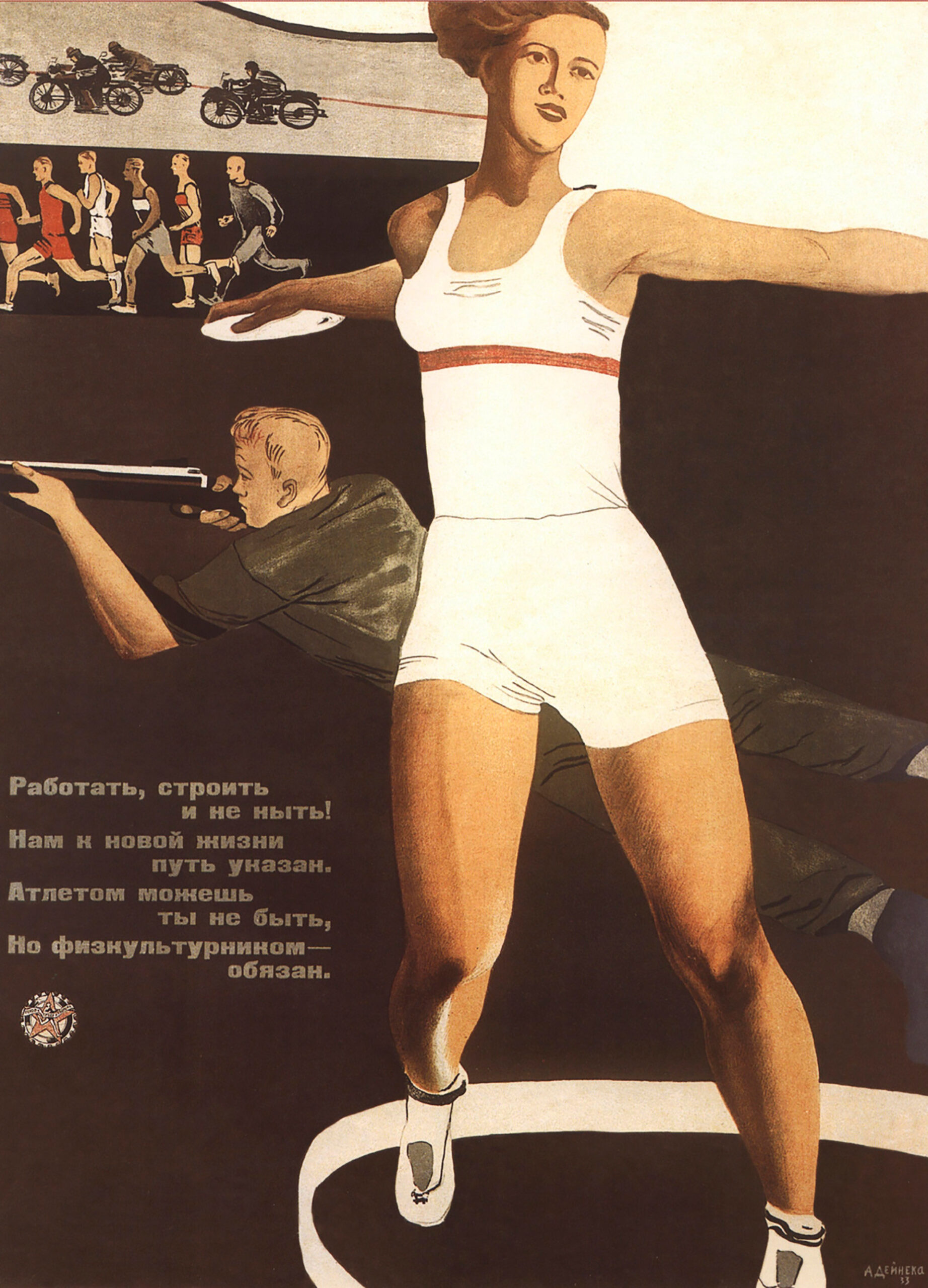 “Sportwoman” – perhaps the most famous poster by Alexander Deineka. The artist generally gravitated to the poster lapidary, publicistic and what was repeatedly blame the critics.

Full height depicted a strong sporty girl, turned half-turned to the viewer. The next moment she will start the disc and seems to be together with him she starts looking at the poster hammered slogan, calling immediately to learn the joy of sports. However, rather – is persistently reminding you to become athletic, strong, hardy (Builder of the Country of Soviets).

In the background we see runners, cyclists. All these people was obviously touched by the grace of collective sports. And who is this athlete-beautiful Sportwoman? That’s right, the enemies will not pass, the security officer on guard, the enemy is ready to shoot. We should mention the calendar – 1933, a time of “heightened vigilance” is gaining momentum.

The second five-year plan. Judging by the posters of those years, women are in complete ecstasy from what can work on construction sites, to pull loaded carts, and, of course, engage in sports – the country needs strong hands. Already released the posters of the happy overthrow of the “kitchen slavery”, began massive construction of public canteens, interchangeably to “the Soviet sports people” does not detract from the building of communism in all sorts of foolishness. Work almost everywhere in three shifts. “Drummer Communist labor” – now the official title for it, even the icon given. And the ideological storm clouds are gathering all over, a bloody 30-e terrible gait through a huge country, mercilessly grinding her. At this time a slender, sturdy Sportwoman the poster Deineka reminds us that everyone must be an athlete.

Often Deineka put the wine in the fact that he turned a blind eye to the atrocities of the “happy state” that the USSR, with its paintings do not exist anywhere except on the posters and other creations of socialist realism. Yes, in the end, because in 30 years he wrote a happy and a sporty, ignoring the terrible truth and the horrors of Stalinism. However, who in 30 years could draw the “horrors of Stalinism”? If anyone tried, for obvious reasons, we do not know about them. Those who will represent it must first be freed from Stalin’s camps (such as Boris Sveshnikov). And in the 1933 Sportwoman encourages exercise, cyclists race we have runners run in a bright future, and the security officer keeps watch, lest the enemies of the people have not shaken the happy Soviet state.